Hollywood movies rarely depict the mayhem of actual combat. In spite of training, planning and standard operating procedures, more often than not, WWII battles did not go according plan. The terror of fighting for survival was often at odds with the precise skills necessary to successfully accomplish the mission. In the air, fighter pilots were called upon to fly in close formation while corkscrewing through intense air combat maneuvers. Often subjected to bitterly cold temperatures, high “G” forces and enemy fire, they had to stay close to combine their firepower on the enemy… yet staying close brought its own danger of mid-air collision.

Keeping your cool while flying a high performance fighter to the very limits of its performance envelope, while simultaneously being a target of ground and airborne enemy fire is a challenge we can scarcely imagine today. As the sculptor, Maj. Fredric Arnold said, “At times it was like trying to thread a needle while riding a roller coaster… oh, yeah… and the guy in the car behind you is shooting at you!”

Dressed as he would have been at the controls of his WWII fighter, FIGURE EIGHT: LONESOME represents the spirit of an airman killed during the war. He did not fall to enemy fire, however. During the chaos of air combat, he lost focus for an instant and inadvertently turned his plane into the plane piloted by his element leader. The propellers of his own P-38 sliced off the tailbooms of the other plane and they both perished in the resulting mid-air collision. So, in addition to the loss of his own life, he carries the burden of taking the life of his comrade.

The photos below show the original LONESOME as it was completed in clay.  The next step in the process required taking a mold from the clay.  That process was done immediately following these photos, destroying the original clay.  Now the sculpture exists as part of the completed monument in bronze. 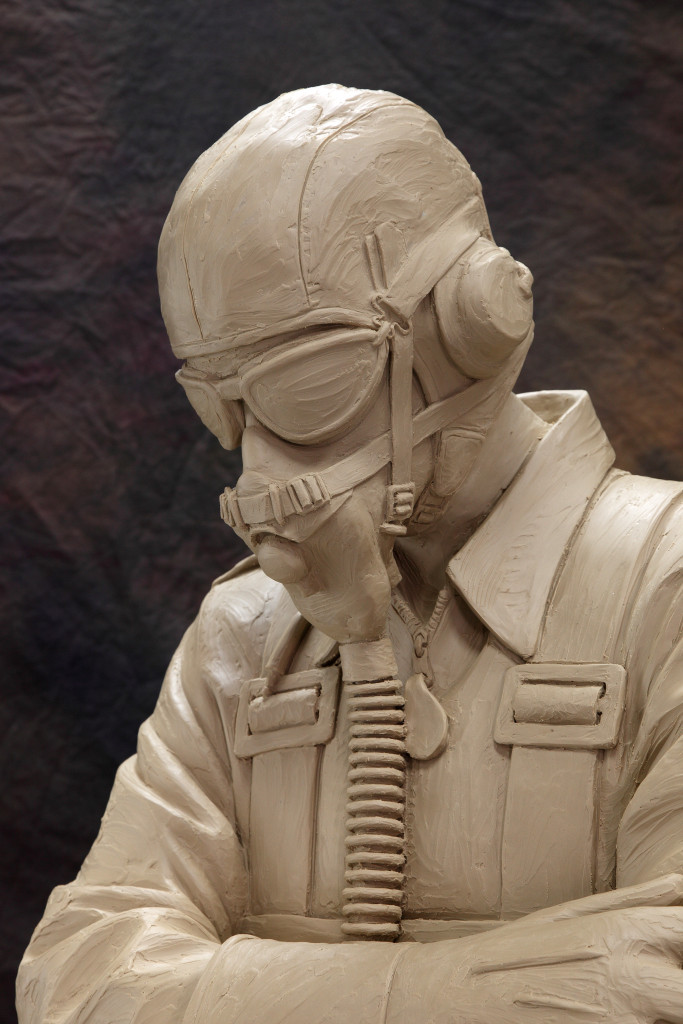 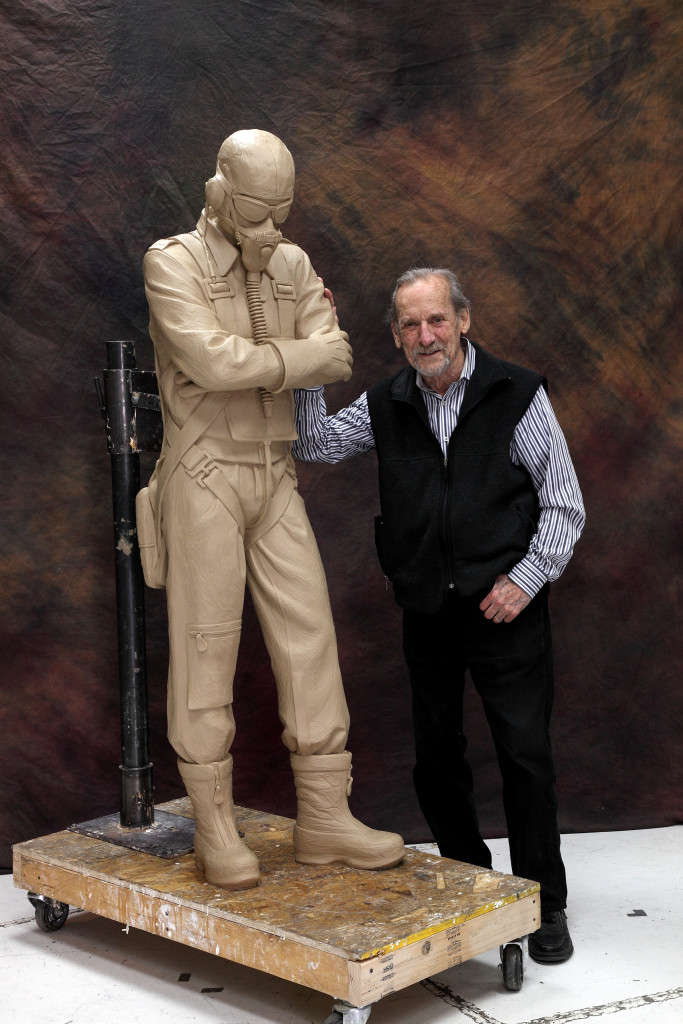 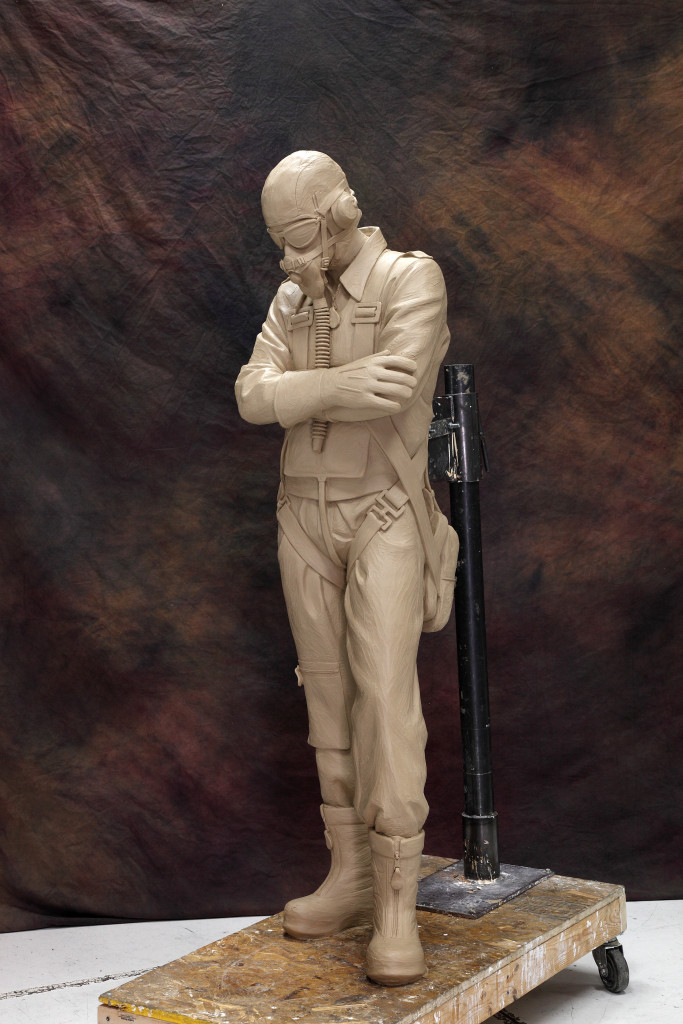 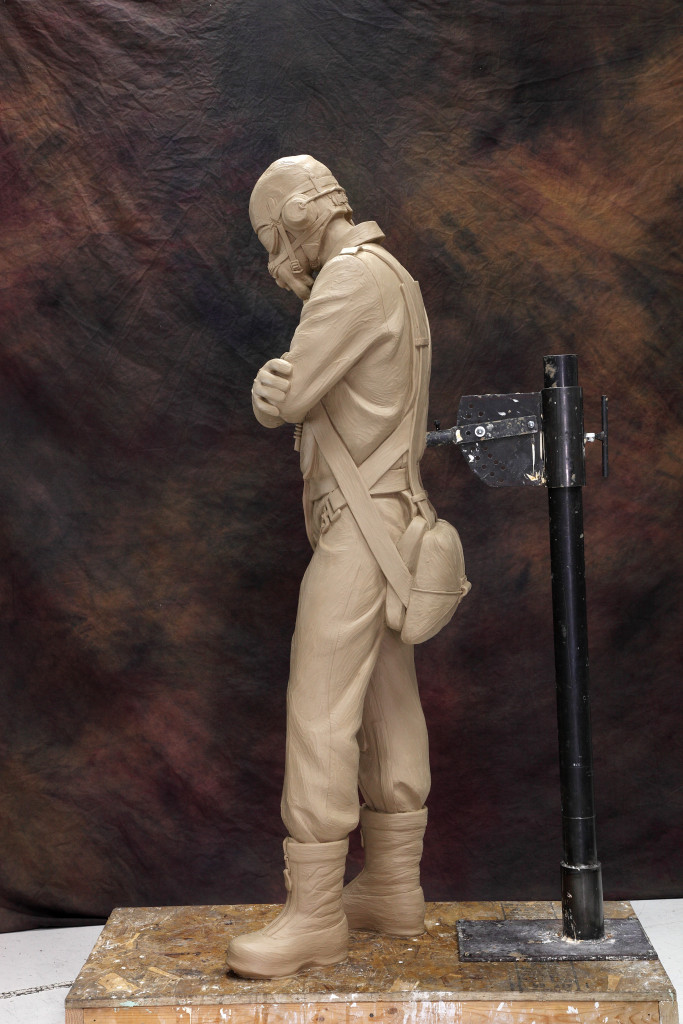 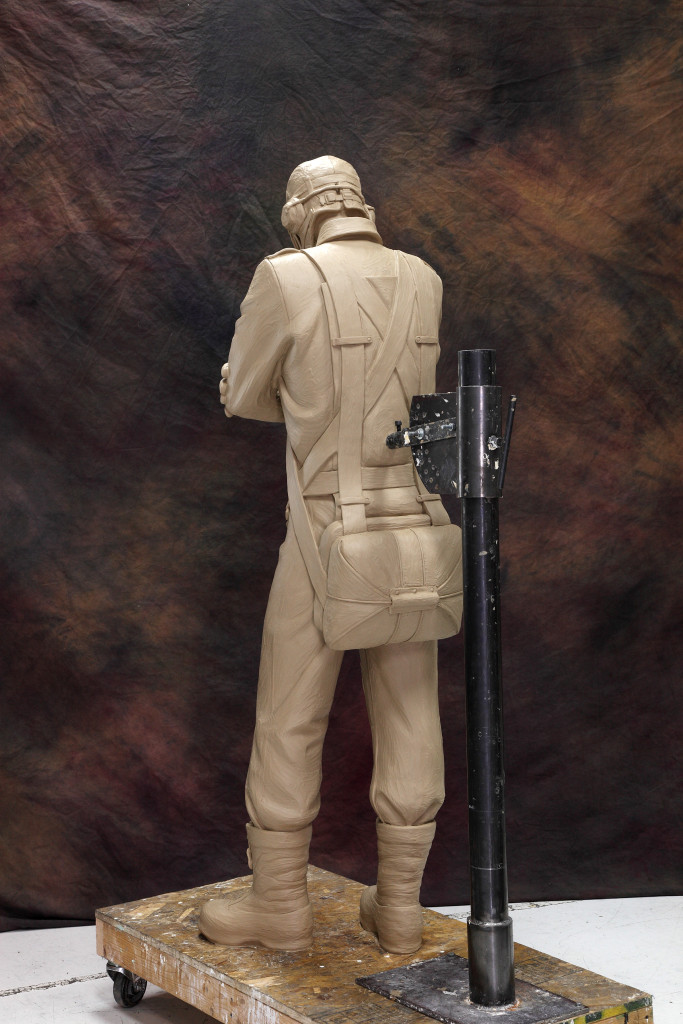 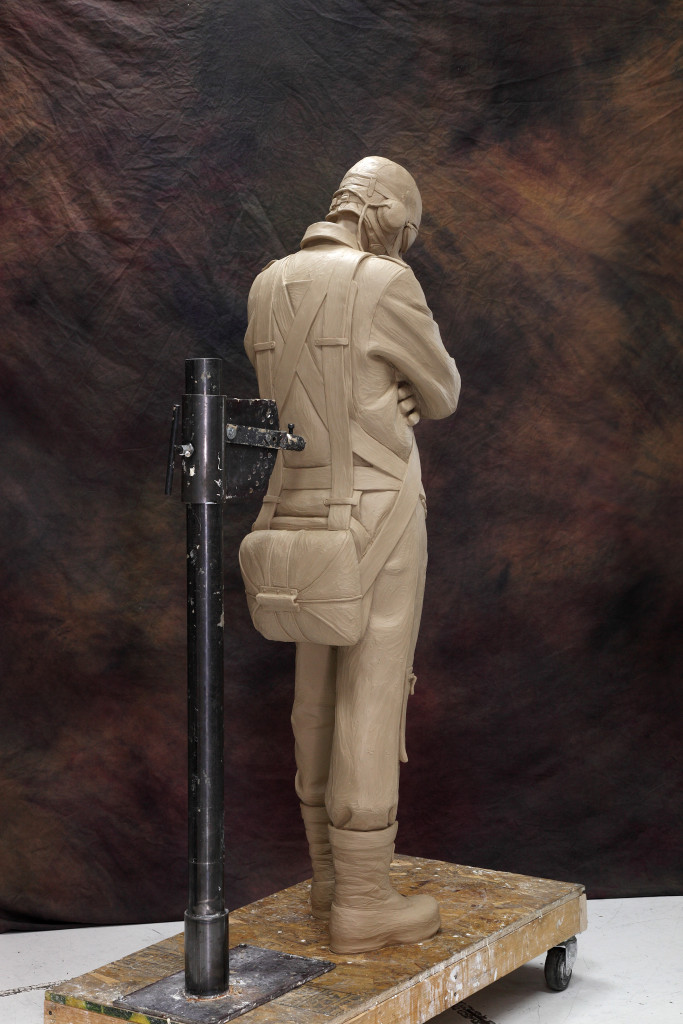 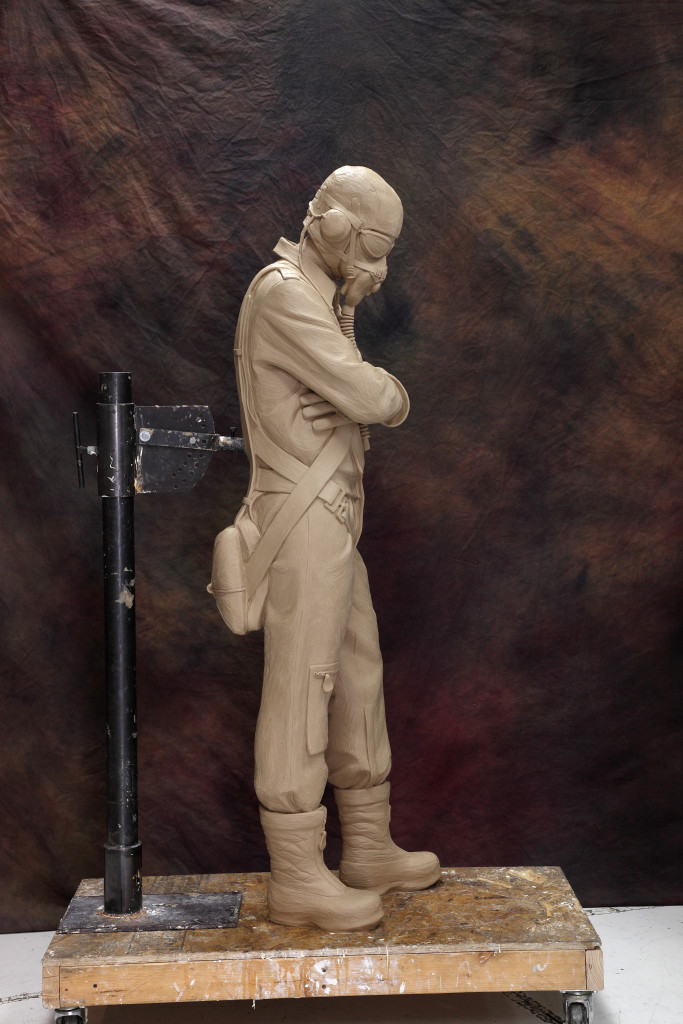 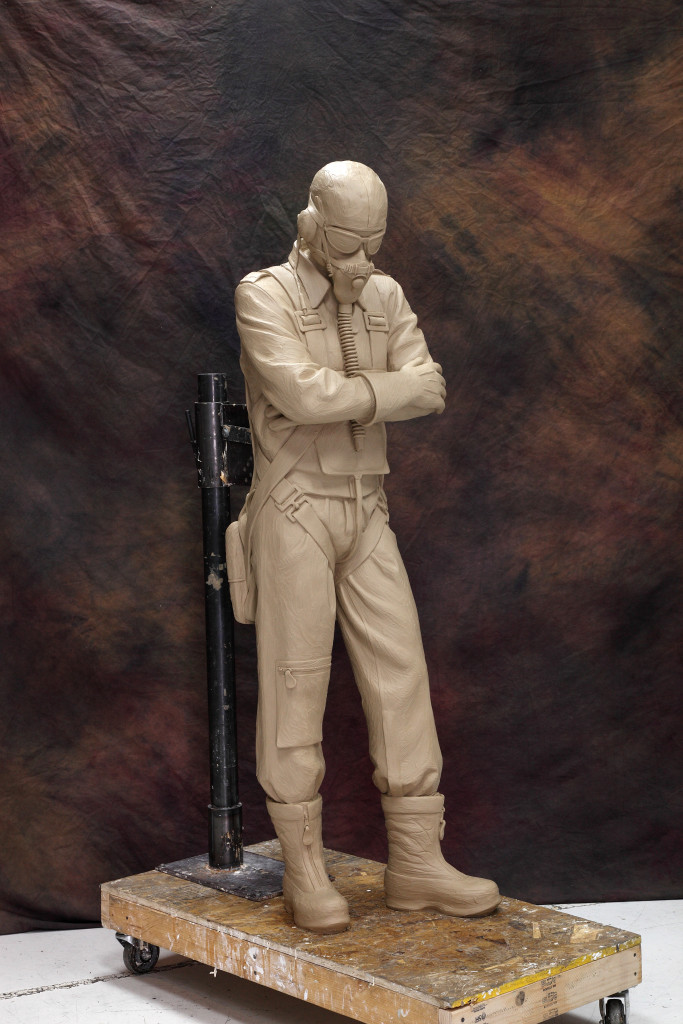 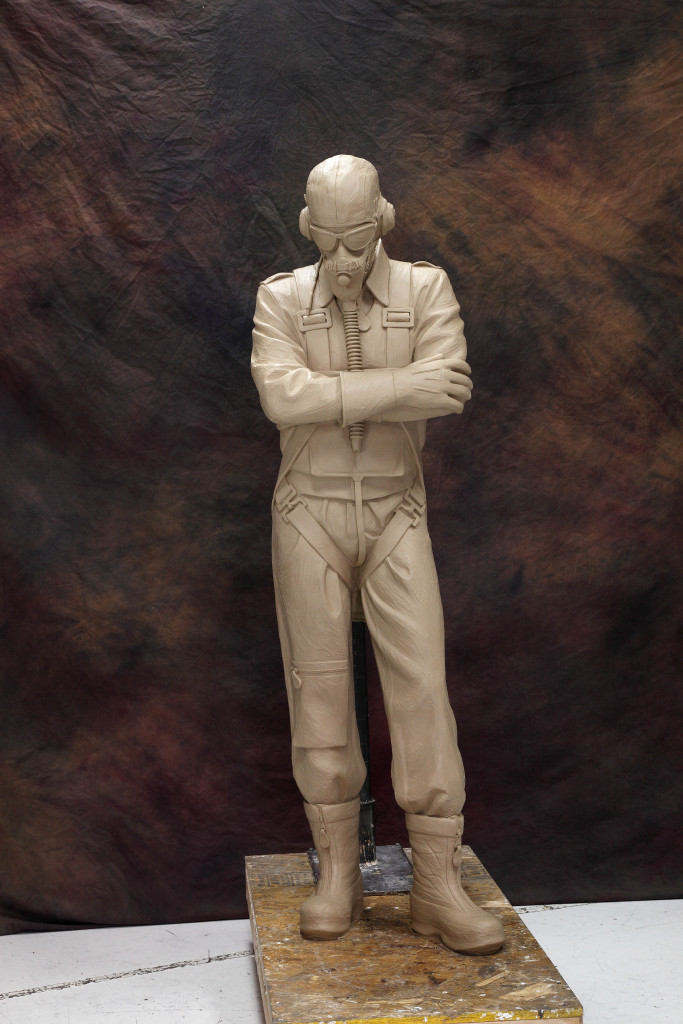