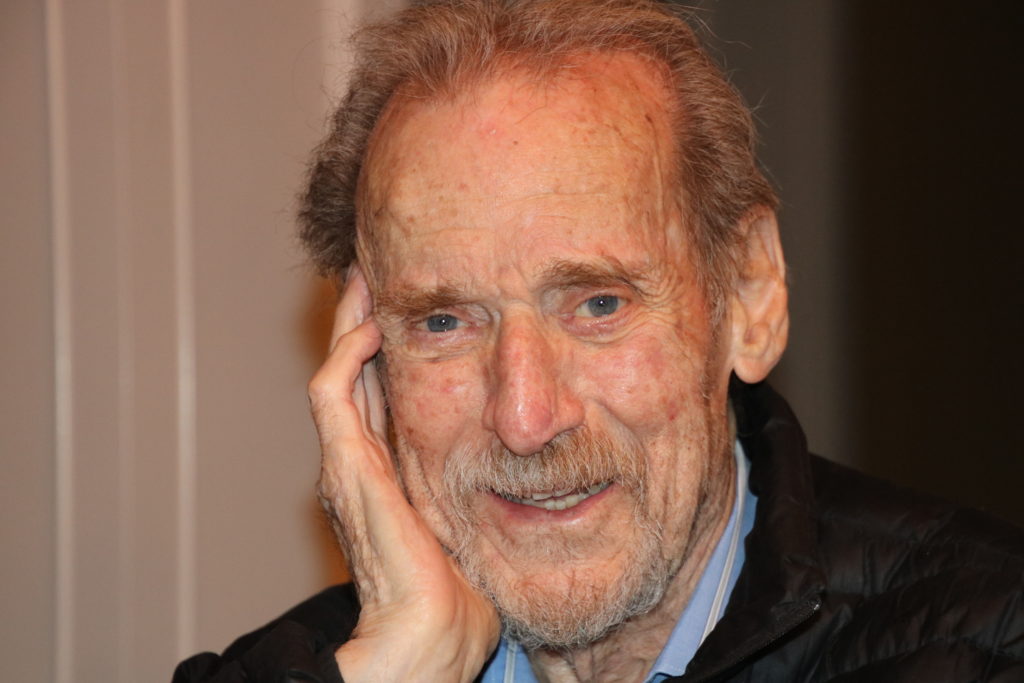 Dad devoted his life to helping people appreciate the incalculable human cost of war. His monument to the US Airmen killed in WWII was his way of communicating that terrible loss. It was fitting that he passed away on May 28th, 2018… Memorial Day. So many people lost their lives during the war, that is why there is a social security death index for families to try and find their lost loved ones that never came home, just to get some closure. It is unfortunate that many did not get to live full lives like he was able to.

His monumental sculpture, “Lest We Forget: The Mission”, fulfilled his vow to honor the more than 88,000 US Airmen Killed during the war. He completed the seven-year project at the age of 94.

A life-long artist, he appreciated beauty wherever he found it. He had no desire to go to war… but answered the call when the need arose. The horrors of the war-scarred him deeply and he vowed to honor the twelve out of fourteen of his original Group and the countless others killed in war. He created the monumental bronze sculpture of twelve airmen in a mission briefing to depict what he called the “quiet heroism of deciding to go on yet another mission, knowing it was Russian Roulette and that some would not return”.

Dad is survived by his loving wife, Natalie, of 73 years, his three children, Marcie, Dana and Marc, his five grandchildren and a circle of friends and supporters that span the globe.

To honor his memory, we invite you to visit www.LestWeForgetSculpture.org, take a moment of your day to contemplate on the debt we owe to the countless young men of WWII to whom we owe so much. He dreamed of seeing two of his sculptures exhibited to the public, one in Denver, the other in New Orleans. If you are moved to do so, click here make a contribution through the website to help fund a second casting of the sculpture.

With boundless love for my father, pride for his life’s accomplishments and admiration for who he was,

Eulogy Delivered at the Funeral of Fredric Arnold

May your father’s memory be a blessing, and may you be comforted by the knowledge of his life well lived.

Occasionally, one has the good fortune to meet a real hero.

Fredric Arnold, or Fredric Kohn, as he was born, was, in my view, one of those heroes.

I call him a hero not only because of his extraordinary story of courage and survival during World War II, the subject of his memoir Doorknob Five Two – the movie of which may yet be made.

I call him a hero not only because of his success as an inventor and entrepreneur – among other things inventing the folding aluminum folding chair and the underlying technology that enabled it; only one of the several successful companies which he created and oversaw.

I call him a hero not only because of his remarkable life-long love affair with his wife Natalie, to whom he was married for 73 years, and with whom he raised three successful, caring and healthy children.

I call him a hero not just because of his gifts as an artist – in pen and ink, as an actor on stage and screen, as a cartoonist and portrait painter, as a writer, and as a sculptor.

All of these and more were aspects of this remarkable man, and reflections on his character: but truly I call him a hero because of the legacy of love, of joy, of curiosity, of excellence in all things, in the words of Rabbi Abraham Joshua, of radical amazement, that he left with all who knew him.

As his daughter Marcie said to us yesterday, “next to the entry for “mensch” – or good man – in the dictionary, there’s a picture of our father.”

Fredric Kohn was born in January 1922, to David and Idele Kohn, in Chicago.

By the time he was 17 he was supporting his parents, as his father’s Parkinson’s made him unable to work.

This was why he enlisted – although as an artist he abhorred the thought of violence, and it was anathema to his character.

After miraculously surviving 50 sorties, he then wrote and illustrated training manuals to help save lives instead of take them.

The war had a profound effect on him…

– put everything else in perspective

– led him to live his life with no regrets

– found and conveyed the magic in each and day

In 1957 moved to Encino, California after a brief period considering acquisition of a dude ranch. Fifty years later, Fred and Natalie moved to Colorado to be near their children and grandchildren, first into an assisted care facility, then nine years later to a private home in 2014.

Fredric was a true believer in human goodness.

As his memoir of his experience as a US fighter pilot in WWII makes clear, even as a Jew fighting Nazis, he did not demonize his enemy, or lose sight of their humanity.

His humanity shines through all the more in his concern for civilians, for the servicemen in his care, for the North Africans who befriended and cared for him, and for his fellow US soldiers, including those oppressed by the bigotry of racism.

In 1960-61, he and Natalie took their children on an extended road trip around Europe – experiencing 28 countries over the span of 14 months. This, his children told me, was fundamentally in service of their learning at an early age the basic similarity of all humans, all cultures; that people are people, just trying to make a living and raise their families. That people are fundamentally good.

This lack of bigotry or xenophobia could also be seen in his close relationship with the German couple who worked for the family for over a decade and became close family friends – just one of the many people Fredric helped to get set up in life.

He wanted to help everybody – family, friends, employees, neighbors – to fulfill their dreams.

This he would do through his listening care and attention, truly interested in the people around him.

He would do it through immediately providing help with training and education when someone close to him expressed an interest – like his grandson Clay’s curiosity about sculpting.

He would do it by giving people a chance, giving the benefit of the doubt, defending reputation – even when a potential employee’s references weren’t great, he’d give them a chance to succeed.

And he loved nothing more than helping people save up enough to get their plan enough in order, to truly launch their own endeavor, their own dream. He supported others; he got them on their feet.

A passion for justice

He lived a remarkable life to make up for what he’d had to do during the war.

With fearless determination, his children remember an expression he would get when he saw unfairness being perpetrated, like a bull lowering its head, ready to fight.

A sign on his desk read, “Today is a good day to fight city hall”. And when events required it, he didn’t hesitate running red lights to break up a fight

Unbreakable commitment to his word

Fredric’s incredible empathy for others was only matched by his lack of bigotry and prejudice.

Relationship with Natalie, married for 73 years

Fredric and Natalie’s remarkable marriage began as a double date blind date with his brother, Bob. After that first meeting, Fredric remarked that he could “spend the rest of his life with that girl”. Although their love was evident from the very beginning, their marriage almost didn’t happen. Fredric was worried he couldn’t support a wife as well as taking care of his parents financially, but his father-in-law stepped in and offered his home to the young couple until they they got set up.

During their 73-year marriage they traveled extensively, leaving the East Coast in the 1950s, and eventually settling in Encino CA where they lived for 50 years, raising three children, and at points also grandchildren. Fredric shared his wife’s passion for adventure which led them to enjoy fascinating travels and experiences. He was as good an audience as he was a storyteller, with a wonderful sense of humor. His children related that in their experience, they never observed a hidden agenda between their parents, nor actions driven by insecurity. He was able to reach out for help when needed and was always there for Natalie, with whom he rarely if ever fought.

Relationship with kids and grandkids

Fredric supported his children’s and grandchildren’s visions, trusted their judgment, and didn’t challenge. He just gave support and love. They felt a real sense that he believed in them, and that whatever they wanted to do, they could. He was immensely supportive for his children, even telling his adult kids how proud he was of them.

To Dana, his daughter known for having a strong personality at an early age, he said: “Keep fighting. Don’t stop just because I’m bigger than you”. Yet he could be tender and loving when, for example, he held Marcie in a steamy shower to help her deal with whooping cough.

He constantly provided guidance and teaching which included lessons with a simplicity and humility that allowed them to be received and remembered. Max, his grandson, lived with him for two years as an adolescent and remembers his grandfather essentially curing him of his anger issues with a single conversation in which he was able to get the young man to ask “Who is this behavior benefitting?”

Among his children and grandchildren, the feeling was unanimous that, “That look of disappointment was enough… it was worse than any punishment”

Love of life, curiosity, can-do attitude; could make a success of anything he tried

In Zen fashion, Fredric gave as much attention to sweeping the floor of a company he owned, or to peeling an apple in one piece, as to a major business deal.

As his son Marc attests, he instilled an attitude of pride in any endeavor, that there’s gratification in doing ANYTHING well. Marc never saw him dismayed or disappointed by anything. He lived his life without regrets or second guessing. He took life’s ups and downs in stride… adapting and moving on.

Fredric felt everything was a blessing, feeling a sense that all his life was borrowed time, having so improbably survived a brutal war. (And, later in life, a brush with serious respiratory issues that had him in the ICU for weeks).

Whenever he was asked which was the best year of his life, Fredric would say “This is!”

While in his 80’s, he set up an eBay store and was delighted by progress, even when he needed help keeping up with the technology.

In 2009, Fredric learned that the only other surviving member of his original 14-man Group from the Class of 42J, had died. He decided to devote himself to creating the most ambitious and meaningful work of his life, his self-described magnum opus. His monumental bronze sculpture, “Lest We Forget: The Mission”, fulfilled his post-WWII vow to honor the more than 88,000 US Airmen Killed during the war, and in particular the 12 men of his original 14-man squadron who were killed in the first 6 months of active combat. He completed the seven-year project at the age of 94. The completed sculpture is currently on display at the Wings Over the Rockies Air and Space Museum in Denver, Colorado.

“Our goal should be to live life in radical amazement. …. get up in the morning and look at the world in a way that takes nothing for granted. Everything is phenomenal; everything is incredible; never treat life casually. To be spiritual is to be amazed.” – AJH

Who is the man who delights in life? Who loves his days, seeing the good?

[The one who] turns from evil to do good; who seeks peace and pursues it.